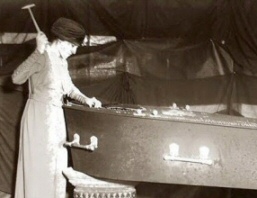 For Those Who Care About Reality, Its Light Has Driven the Last Nail into the Coffin of Birthers’ Claims that the PDF is a “Forgery.”

More than a year has passed since I wrapped up my public commentary here on the claims of the “birther” movement, and brought this blog to its official close.

However, a few things happened during this year of 2013 (and one in particular) that have finally led me to write this epilogue.

Even though I thought the issue had already been beaten to death, over the course of the past 14 months a few additional little bits of information have come forth.

Not so much on the legal and Constitutional front, though. About the only one left still beating the worn-out “citizen-parents-required-to-be-a-natural-born-citizen” drum is Mario Apuzzo, and he hasn’t had anything new to say since before I quit the scene 14 months ago. Apuzzo posted a total of 4 articles this year, and all were just a rehash of his same claims that have been widely debunked.

1. What I wrote here about the meaning of “natural born citizen” has been confirmed by every judge and every legal expert of any real stature who has ever ruled or otherwise spoken on the matter.

Next, from the technical point of view regarding the Presidential birth certificate and related matters:

2. It’s still true at the end of 2013 that — birther assertions to the contrary notwithstanding — no birther “expert” has ever factually disproved even one significant point of the technical analysis that I published in a 221-page book back in the summer of 2011.

Although a number of the birther “experts” have quietly dropped their public involvement, I find it pretty remarkable that they continued to make the “forgery” claims for so long without ever being able to factually deal with such critiques published by myself and others. That has to do with the nature of the people making the claims, though, rather than with the nature of the evidence.

A few are still pushing the “forgery” claims to this day, of course. The hard-core birthers, almost by definition, live in a world where facts don’t matter — unless, of course, they happen to be facts that they like. But really, the only thing that matters to them is the meme.

3. We now know to a good degree of certainty what the penciled race codes on 1961 Hawaiian birth certificates mean. And it now seems that yes, not only did the Cold Case Posse actually lie to the nation about what the federal race codes meant, they also apparently fabricated what the State of Hawaii race codes meant as well.

As with the federal codes, they publicly claimed in the summer of 2012 to have the Hawaii race codes. But they never produced the slightest evidence that they actually did.

And the documentation that has come forth recently indicates that those codes never meant what the Posse claimed, in full-blown press conference, that they meant.

“9” never meant “Unknown or race not stated,” as claimed by Corsi / Arpaio / Zullo & company. It meant “Other races,” and in a state with so few black people that there was no “black” race designation in the rest of the codes, it was precisely appropriate and accurate for the race of Obama’s father.

The exact meaning of the penciled Hawaii codes was one of two remaining mysteries I knew of when I left the issue in the fall of 2012 (and the other will be addressed by the end of this post). It was the one thing I wished I had been able to uncover but didn’t, and I’m gratified to Kevin Davidson (Dr. Conspiracy) for finally solving it.

In fact, it seems to have been the last little mystery. In solving it, Dr. Conspiracy has helped bring the title of this blog — Investigating the Obama Birth Mysteries — to its final resolution.

4. The full birth certificate of the woman I referred to as “Hawaii Girl” in an attempt to guard her privacy was leaked online this year by birther attorney Orly Taitz. And that full certificate entirely confirms that I accurately discovered every important detail about this birth certificate by analyzing a leaked image of the back of the certificate.

Among those details, I accurately identified:

and a few other details like parents’ names, address where they lived at the time, and so forth.

Orly Taitz’s recent publication of the full certificate completely confirmed my conclusions, in particular, of what the birth certificate number and the parents’ race designations were.

5. Finally and most importantly, the “forger” of President Obama’s birth certificate has been discovered, named, and verified.

Yes, the So-Called “Forger” of Obama’s Birth Certificate Was Outed in 2013.

Back in the summer, I learned that blogger “nbc” had identified the specific type of machine that produced the PDF image of Mr. Obama’s birth certificate.

It was a Xerox WorkCentre.

A couple of different models in this product line use the same basic algorithms. (An “algorithm” is a pre-defined sequence of exact steps to do something.) The White House is verified to have possessed and used a Xerox WorkCentre (model number 7655) during the exact time frame when Obama’s birth certificate was published. 1 Models 7655 and 7535 operate very similarly. 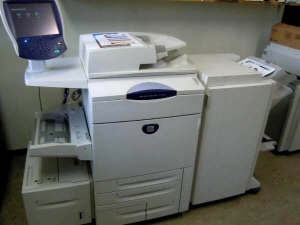 WANTED: For Producing the Anomalies in Obama’s Birth Certificate — the Xerox WorkCentre 7655. Approach With Caution.

And all you have to do to reproduce the many “suspicious” effects seen in Obama’s PDF, is use one of these Xerox WorkCentres to scan a birth certificate into an Apple computer, then rotate the image and save it as a PDF file.

And that’s obviously how Obama’s PDF was produced. A White House staffer took a paper birth certificate (which was seen by reporters, and which we have two actual photographs of, courtesy of reporter Savannah Guthrie), placed it haphazardly on the scanner glass of a Xerox WorkCentre (all indications are it was the 7655), scanned it into a Mac, rotated it, and saved it as a PDF.

Simple experiments reproducing these steps have been conducted that give the same “anomalies” that birthers wailed and filed lawsuits about.

Back in 2011, when I wrote my book, I speculated that someone might well discover the exact software, and I said that if they did, they would earn a mention at my web site.

It’s time to live up to that promise.

I already mentioned “nbc.” Another person who deserves such a mention is commenter “justlw,” who seems to have been the first person to bring up the Xerox WorkCentre, way back in March of 2012.

And another is “Reality Check,” who this year has conducted experiments that produced results virtually identical to the President’s birth certificate.

Congratulations and good work, you three. My hat is off to you.

I’m now going to post this epilogue, and wish you all — birthers, non-birthers and those who were never interested either way — a happy and prosperous 2014.

1The proof that the White House actually had a Xerox WorkCentre 7655 in its possession and use during April of 2011 is easily seen in a White House information release written by Jay Carney and dated 2:10 pm Eastern Standard Time, April 18, 2011 — 9 days before the release of Obama’s birth certificate.

For as long as it’s available on the web, that release may be accessed here.

All one needs to do to see the proof that the White House was using a Xerox WorkCentre 7655 to scan and produce PDF files is: Open up either Obama’s tax return or Biden’s in Adobe Acrobat Reader and look at the Properties.

For the sake of more permanent archiving, I am saving an unaltered download copy of Obama’s tax return here, and a copy of Biden’s here.

Note: An earlier version of this article erroneously stated that Mr. Obama’s 2010 Financial Disclosure PDF had been produced using a WorkCentre model number 7655. The error was noted on Dr. Conspiracy’s blog by birther Hermitian.

As is typical of birthers, Hermitian is delighted to have found a tiny flea on the cat, which he then uses to try and argue that — since most people tend to associate fleas with dogs — this means that the cat cannot possibly be a cat at all, but must instead be some form of miniature German Shepherd.

In other words, any excuse at all — no matter how minuscule — is gleefully considered to be full justification for hanging on to the birther fantasy like a soaked rat clinging to a shattered bit of shipwreck in the midst of an Atlantic gale.

But back to the specific case at hand: We know that a simple and quite obvious and intuitive work flow produces the exact effects seen in Obama’s birth certificate PDF. And we also know that the White House was using a Xerox WorkCentre 7655 within 9 days of the date Obama’s PDF was posted in April of 2011, and that they continued to use one or more Xerox WorkCentres after Obama’s PDF was posted.

As far as I know it hasn’t been proven to date, but I would frankly be a bit surprised if the image-compression-to-PDF algorithms in the WorkCentre 7765 were much if any different from the image-compression-to-PDF algorithms in the WorkCentre 7655. A quick web search reveals, for example, an entire line of Xerox WorkCentres with very similar model numbers — including 7655, 7665, 7675, 7755, 7765, and 7775 — which all use the exact same drum. And based on the product literature, the 7655 / 7665 / 7675 appear so visually identical to the 7755 / 7765 / 7775 that it seems impossible to me to tell any of them apart without actually hunting for the model number.

So once again, we come back to the title of this post. To the degree that further information has emerged over time, it has failed to disconfirm or disprove anything that was published in my book. Instead, those conclusions have been repeatedly confirmed by the emergence of new information.

PS: Yes, cats get fleas too.

This entry was posted in Conclusion, New Information, What's Happening. Bookmark the permalink.