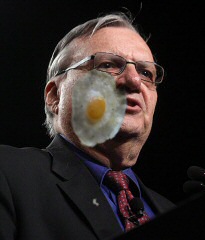 Upon receipt of a request that they were legally able to comply with, the Hawaii State Department of Health has provided clear official verification that the information in the long form birth certificate image posted last April on the White House web site does indeed match that on the birth certificate in their files.

The official verification was obtained by lawyers for the Mississippi Democratic Party, and made public in connection with a court case in which birther attorney Orly Taitz is suing the aforementioned party.

The release of this verification once again highlights the astonishing lack of discernment and reality of the press conference three months ago in which Maricopa County (Arizona) Sheriff Joe Arpaio (popularly known as “America’s Toughest Sheriff”) and the “Marikopa Kops Birther Posse” publicly claimed that the President’s birth certificate was a “forgery.”

This week’s newly released official verification from the State of Hawaii — complete with the hand-written initials of the State of Hawaii’s chief Registrar Alvin T. Onaka — clearly states that Obama’s original Certificate of Live Birth is on file with the Hawaii Department of Health, and that the information on that original document matches the information that was published at the White House web site.

You really can’t say it much more clearly than that. The birthers, of course, will continue to demand a microfilm copy, and will insist that somebody at the Hawaii Department of Health — actually, a lot of somebodies — must be “covering for” a “badly made forgery.”

Except there never was any decent technical evidence at all that the file released by the White House was a forgery. I hate to say, “I told you so,” but — I told you so… nine months ago.

As I’ve noted many times both before and after Arpaio’s press conference, not one single substantive point in the analysis referenced has ever been successfully refuted.

Actually, I began telling you so within 10 days after the birth certificate was released. I took a lot of heat for simply speaking the truth, but the truth was and is the truth.

So, birther cheerleaders and donors — how does it feel now to have been used, for the past year, by the propagandists?

An image of Hawaii’s official letter of verification can be seen here.

The entire motion that the letter of verification was filed with can be seen here.

This entry was posted in Conclusions, I Told You So, What's Happening. Bookmark the permalink.