In this article, we will see how America’s first legal text reveals an understanding of what the Founding Fathers’ generation meant by “natural born” — as in “natural born citizen.”

It was a six-book project — in two volumes. It would take until 1796 to complete.

Written by “One of the Greatest Early American Jurists” — and Subscribed to by Three US Presidents, Various Founding Fathers and Framers of the Constitution, and Half the US Supreme Court 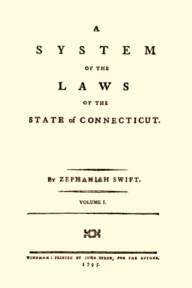 Swift has been described as “one of the greatest early American jurists.” He helped frame the Connecticut state Constitution and served as Chief Justice of the Connecticut Supreme Court.

And our nation’s leaders must have been impressed with his work, because he was chosen to compile the very first official set of United States statutes, “Folwell’s Statutes,” which was published the next year. (It was called “Folwell’s” Statutes because Richard Folwell was the publisher.)

Quoting the University of Connecticut School of Law:

“In 1810, Swift wrote A Digest of the Law of Evidence, the first American treatise on that subject. And in 1822, he authored his most well-known work, the Digest of the Laws of the State of Connecticut. Modeled after Blackstone’s Commentaries, it referred to Connecticut law but covered American law generally and was used throughout the U. S. It had significant influence at the time and is still being cited today.”

Swift’s legal treatise, titled, A System of the Laws of the State of Connecticut, was issued on a subscription basis, in two volumes which spanned six books. The first volume is available here.

Subscribers included — among other notables —

Swift's Hundreds of Subscribers
Were In All 16 States

There were many other subscribers, of course.

Three of Swift’s subscribers already were (in the case of George Washington) or would soon become United States Presidents. Three of them were members of the US Supreme Court — including the Chief Justice.

Since the Court only consisted of six members in those days, that means that half of the US Supreme Court subscribed to Swift’s series of legal expositions.

And lest it be said that this was only relevant to Connecticut law, it should be noted that the subscriber list contains subscribers from literally every State of the Union — including all of the Thirteen Original States, Vermont, Kentucky, and even Tennessee — which became our 16th state around the time the second volume was published.

Swift wrote in 1795. It was nearly 20 years after the Declaration of Independence, and 8 years after the Drafting of the Constitution. The term “natural born subject” was fading in its use in America, but was obviously still being used.

And here’s what Zephaniah Swift had to say about citizenship:

“The people are considered as aliens, born in some foreign country, as inhabitants of some neighboring state in the union, or natural born subjects, born within the state. It is an established maxim, received by all political writers, that every person owes a natural allegiance to the government of that country in which he is born.”

Note also his understanding of the relationship between a person and the country in which that person is born:

“It is an established maxim, received by all political writers, that every person owes a natural allegiance to the government of that country in which he is born.

There’s no uncertainty there. There’s no doubt, no ambiguity about a person’s natural allegiance to the country in which he was born.

“The children of ambassadors, tho born abroad in a foreign country, are considered as natural born subjects [of the sending country], because their parents are not supposed to owe a natural allegiance to the government to whom they are sent, but that which sends them, and of course their children must owe allegiance to the same power. The children of aliens, born in this state, are considered as natural born subjects, and have the same rights with the rest of the citizens.“

Swift therefore makes it plain that children of ambassadors are not natural born subjects, but children born in Connecticut of all other aliens are.

This is in exact accordance with the “same rule” that the US Supreme Court tells us (in US v Wong Kim Ark) has always applied both in England and in the United States.

And Swift also makes it plain that when he uses the word “natural born subjects,” he is referring to individuals who are citizens of the United States:

“The children of aliens, born in this state, are considered as natural born subjects, and have the same rights with the rest of the citizens.“

In short, Zephaniah Swift concurs with what we know from every other legal authority: the children born on US soil were always considered to be “natural born” — regardless of the citizenship of their parents. And they are citizens.

They are natural born citizens.