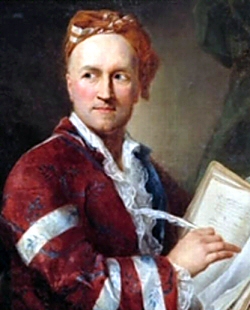 According to a new wave of commentators on the US Constitution — such as “birther” lawyer Mario Apuzzo — the Founding Fathers, when writing that the President was required to be a “natural born citizen,” did not rely on our own English heritage and existing English-language terminology for the concept and definition of that phrase.

Instead, according to Apuzzo and others, the Framers of the Constitution were referring to a concept of citizenship put forward by the Swiss philosopher Emer de Vattel in his 1758 book, “Le Droit des Gens,” or “The Law of Nations.”

In his book, Vattel stated that the “naturels” or “indigenes” were those born in a country of parents who were citizens. And he added, “I say that, in order to be of the country, it is necessary that a person be born of a father who is a citizen; for if he is born there of a foreigner, it will be only the place of his birth, and not his country.”

But some have noted that there are just a few small problems with the idea that the Framers of the Constitution were thinking of Monsieur Vattel’s ideas when they wrote that the President of the United States had to be a “natural born citizen.”

The First Problem: Neither Vattel Nor His Translators Had Ever Used the Phrase “Natural Born Citizen.”

The first difficulty is that Vattel’s phrase that Apuzzo and others quote (“les naturels, ou indigènes” ) wasn’t actually translated into English using the phrase “natural born citizens” until 10 years after the Constitution’s Presidential eligibility clause was written.

A dubious claim, to be sure.

Exactly how dubious begins to become clear when you understand that the phrase “natural born subject” already had a very long and clear history in the English language.

A second issue is that this exact phrase was a standard term in the English common law, which was very well known to most if not all of the Framers of the Constitution. And the phrase had always, literally for centuries, included all children born on the soil of the country.

Even those with two alien parents.

The only exceptions were children born to foreign royalty and ambassadors, and to members of a hostile, invading army.

And exactly how dubious Apuzzo’s claim is becomes even more clear when you look at the research of Professor Donald Lutz into the influences on our Founding Fathers.

Lutz’s research shows clearly that for every one time the Founding Fathers quoted Vattel, they quoted Blackstone, the authority on the common law, a whopping sixteen times.

The third problem is that nobody has ever produced any quote, from any significant figure in history, that actually says that the Founding Fathers or Framers of the Constitution relied on Vattel for their definition of “natural born citizen.”

So if Vattel’s phrase had never been translated “natural born citizens,” and if “natural born” was a well-known, long-standing term that had been used for centuries to describe subjects of England — not just in England itself but also in the American colonies — and if we have no record whatsoever that actually says that any Founding Father or Framer of the Constitution ever relied on Vattel for the meaning of the term… one begins to wonder why exactly it’s claimed that the meaning came from Vattel?

No Debate At All Implies an Understood, Unambiguous Term.

The fourth problem is that there was no debate at all on the term.

If the Framers of the Constitution had intended the use of this term — with its well-known, established meaning — in any different sense than the one which it had always held (or in other words, if they had intended to mean Monsieur Vattel’s concept), then undoubtedly there would have been some debate as to exactly what the phrase was being used to mean. And undoubtedly there would have been some clarification as well.

But there wasn’t. The records of the Constitutional Convention show no debate whatsoever on the meaning of the term.

Actually, if there had been any doubt as to the term’s meaning, it would’ve been far better to use a phrase that did not have any ambiguity at all in its meaning.

For example, if the Founding Fathers had meant Vattel’s meaning, then logically, one would expect them to have used Vattel’s terminology — either “naturel,” or — even better, “indigene,” which is a recognized word in English as well as in French.

But they didn’t use either of those words.

Actually, even that might have required a bit of clarification, since Noah Webster’s famous 1828 dictionary gives the meaning of “indigene” as “One born in a country; a native animal or plant.”

It would appear that — even in regard to the same word — even Mr. Webster wasn’t thinking in terms of the Swiss guy’s concept.

New Information! We Can Get a Pretty Good Idea of What Was Being Said in Early America Regarding Vattel and Natural Born Citizenship.

Today I realized that it’s actually fairly easy to get a pretty good idea of how much Emer de Vattel was being talked about in regard to “natural born citizenship.”

It turns out that we have a wonderful repository of a large number of searchable books that date back for literally hundreds of years.

This repository of searchable texts is brought to us courtesy of Internet giant Google, and it’s available at books.google.com.

Now if Mr. Vattel and his work — The Law of Nations — was associated with the phrase “natural born citizen,” then undoubtedly somebody will have written something about that fact.

We can therefore get an idea of how closely Vattel’s name was associated with the phrase “natural born citizen” — by searching books of the era both for that phrase and “Vattel” in the same work.

For example, we can look for materials published between the years of, say, 1758 (when Vattel’s work was first published) and the end of 1786 — eight years after the Constitutional Convention. We just have to do an “advanced search.”

That would give us enough time to catch any references to Vattel and “natural born citizen” for close to 30 years before the Constitutional Convention, and up to the publication of the first English-language Vattel version that actually employed the phrase, in 1797.

Actually — let’s go beyond that. Let’s go ahead and search up to January 1, 1800. That will give us a span of 42 years, including about 30 years before and a dozen years after the writing of the US Constitution. It may also give us some results that indicate how much “buzz” there was about “natural born citizen” as used in the 1797 translation of Vattel’s book.

And of course searching the book itself doesn’t turn up the phrase in English. So that’s a dead end.

[Note: Search results don’t appear to be 100% consistent. A search the next day gave NO results, so the search engine automatically dropped the quotes and managed to find a couple of items that used all the words, but not the exact phrase “natural born citizen.”]

Okay… since Americans weren’t really called “citizens” until after the Constitution, let’s change that to:

One of these mentions both “Vattel” and “natural born,” but the mentions are clearly unrelated. Strike one.

The second is titled, “The Revised Reports: Being a Republication of Such Cases in the English Courts of Common Law and Equity : from the Year 1785, as are Still of Practical Utility, Volumes 1-5; Volume 53.”

So… that’s a collection of legal cases from England, put out by a British publisher. (The English company “Sweet & Maxwell” is still in business, by the way). While I couldn’t access the text, it seems quite safe to say that a collection of English court cases won’t contain any discussion of Vattel and “natural born citizen” in America. Strike two.

The third title is “Pamphets of the American Revolution,” dated 1776. A bit of searching reveals this doesn’t appear to be an actual book. Although a similarly-titled book was published in 1965, there’s no record of any such book dated in the 1700s at the Library of Congress, at Amazon, anywhere on the web, or among the 140 million old books in the database of AbeBooks.com. So it doesn’t exist. It’s kind of a rogue database entry, most likely referring to the 1965 book.

Still, that book might contain a pamphlet with both of the phrases in the same pamphlet.

Here’s a description of the 1965 book: “This is the first volume of a four-volume set that will reprint in their entirety the texts of 72 pamphlets relating to the Anglo-American controversy that were published in America in the years 1750-1776.”

So there are a bunch of pamphlets in the 1965 work, not just a few. That seems a dead end as well. Strike three.

Our final “hit” is a reference to the actual 1797 edition of Vattel’s work, which translated his phrase into English as “natural born citizens” for the first time.

Well… of course that would be there. Strike four.

So we’ve completely struck out. As far as we can tell, there does not seem to be record of one single mention of “Vattel” together with the phrase “natural born,” at any time between the years 1758 and 1800, in the entire vast store of books searchable through Google books.

The Founding Fathers Relied on Vattel for the Definition of Natural Born Citizen. So Surely One of Them Must Have Noted it in Some Book Over the Next 50 Years After Writing the Constitution, Right?

Hmmm…. That similarly strikes out. Nothing at all.

[Note: A search the next day did produce 3 results, but none of these were useful.]

Our next question ought to be: Well, how often was the phrase “natural born” used? Maybe it’s a phrase that was only used a very few times, but always in reference to Vattel.

Fortunately, we can do that search, too.

A Google books search on

That sounds like a lot — and it is. Google sometimes overstates the case. Running it all the way down reduces it to 303 real results.

Still, 303 results without Vattel is an awful lot more than the “none” we got from trying to associate Vattel with the term.

So What of the Idea that the Phrase Comes Very Specifically from our English Heritage and the Common Law?

These letters appeal to the aforementioned recipients, on the basis of the fact that, “by the common law,” the colonists in America are “natural-born subjects” — and are therefore “entitled to all the privileges of such.”

Hmmm. it would appear that there is absolutely no historical evidence at all for any link between Vattel’s idea of what citizens were, and the Constitutional phrase, “natural born citizen.”

In fact, it turns out that the Framers of the Constitution actually did use a phrase that had no ambiguity at all in its meaning.

Because it had never, ever been used to mean anything other than what it had always meant.

That phrase, of course, was “natural born.”

And it came directly and absolutely from our English heritage and the common law.