The Supreme Court in Minor v Happersett Never Claimed That Citizen Parents Are Required to Make a “Natural Born Citizen.” 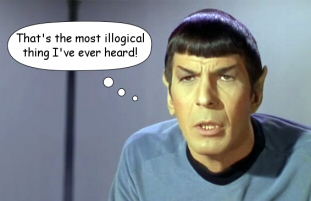 Note: This is Part Four in a series demonstrating the falsehood of the claim that the Supreme Court case Minor v Happersett (1875) created a “binding precedent” that it takes two citizen parents, plus birth on US soil, to make a person eligible to be President.

For Part One, see here.

Our fourth demonstration that the “flagship” claim by Mario Apuzzo and Leo Donofrio is false comes by the way of simple logic.

“There is no doubt that someone who has A PLUS B can be a member of this club.”

simply is not a statement that

“Nobody who only has A can be a member of this club.”

That’s elementary logic, and our birther lawyers go to all kinds of peripheral garbage to try and deny it.

Let’s give a more concrete example.

It is simply a statement that someone who has both will be guaranteed a scholarship.

And yet that’s the construction that Donofrio and Apuzzo argue regarding Minor v. Happersett.

They argue, in essence, that the university has already proclaimed that no one other than those with both straight A’s and perfect ACT scores will get scholarships.

“At common-law, with the nomenclature of which the framers of the Constitution were familiar, it was never doubted that all children born in a country of parents who were its citizens became themselves, upon their birth, citizens also. These were natives or natural-born citizens, as distinguished from aliens or foreigners.”

This is the very passage in Minor v. Happersett that Apuzzo and Donofrio and their groupies quote to justify their nonsense.

They leave off or explain away the following comment, which specifically says that the Court was not going to address the status of children born on US soil to foreigners domiciled here. And they claim, nonsensically, that the foregoing passage purposefully and bindingly excludes such children from natural born citizenship.

The first thing to note is that the Court, even in this passage, has reference to the common law, but never mentions the Swiss philosopher Vattel, who these guys claim gave our Founding Fathers the concept of natural-born citizenship.

Apuzzo tries to deal with this by making the claim that the Court was referring in this phrase to American common law, not English common law.

Never mind the fact that at the time the Founding Fathers established the country, there really was not and could not have been very much at all in the way of “American common law” separate from the common law of the country that all of the Colonies were a part of — England.

Never mind the fact, either, that Blackstone’s treatise on English common law was the fundamental text of the law school at William & Mary — our nation’s first law school.

Never mind the fact that Blackstone was quoted by the Founding Fathers some 16 times more frequently than Vattel.

“These were natives or natural-born citizens, as distinguished from aliens or foreigners. “

Here the Court made absolutely no distinction in this sentence between “natives” and “natural born citizens.”

And yet Donofrio and Apuzzo claim there’s this enormous difference — that just being a “native” doesn’t make you a natural born citizen.

Yet the Court made no distinction at all between the two. Perhaps Leo or Mario can explain that?

Secondly, the Court recognized two, and ONLY TWO categories of people. One was “natives or natural-born citizens.” The other was “aliens or foreigners.”

There was not, and never had been, any fictional third category of native-born citizens who were born citizens, but who were not “natural-born.” Such a third category appears NOWHERE — not in Minor v. Happersett. Not in US v. Wong Kim Ark. And not in any other case in the entire history of American jurisprudence that anybody has ever produced.

[Note: Having said all that, there do appear to exist natural born citizens who are not also “native born.” These are those persons who have been born US citizens because of their birth to US citizens abroad. The recognition of such children as “natural born citizens” was provided for by our very first Congress. And everything I have read on the subject indicates to me that such persons are also, to this day, also eligible to run for President.]

Given the lengths to which Leo Donofrio and Mario Apuzzo have gone to “prove” their point, and given their stunning legal brilliance, surely if ANY case or statement establishing the existence of a “native-born citizen” who was not a “natural-born citizen” existed anywhere, Mr. Donofrio or Mr. Apuzzo would have produced it by now. Wouldn’t they?

native, a: 1. Produced by nature; original; born with the being; natural; not acquired; as native genius; native affections; a native talent or disposition; native cheerfulness; native simplicity.

2. Produced by nature; not factitious or artificial; as native ore; native color.

3. Conferred by birth; as native rights and privileges.

4. Pertaining to the place of birth; as native soil; native country; native graves.

5. Original; that of which any thing is made; as mans native dust.

We could go on through the definitions of a bunch of similar and related words, and we would find much the same. I’ve read all of the relevant definitions, and there is nothing in Webster’s 1828 dictionary to contradict the above statements that “native” carried a meaning of “natural” or “at birth.”

If there had been any real distinction between a “native-born” citizen and a “natural-born” one, surely someone would have clarified the distinction. But no. Apparently, EVERYBODY understood that (with the sole exception that children born abroad to US citizens were also “natural born”) the terms meant essentially the same thing.

Mario Apuzzo Tries to Answer the Logic — and Fails Miserably.

Mario Apuzzo attempted to answer these very statements at his blog. Here’s what he said:

Here Apuzzo resorted to what has become a typical “birther expert” rejoinder: The claim, with no (or at least, totally insufficient) supporting evidence, that the points raised by critics are “ridiculous,” “incoherent,” or “hilarious.”

If you can’t win the discussion on the facts, then try to find some point — any point at all — on which you can attempt to discredit the person bringing the facts.

And you don’t have to have any actual evidence of your assertion. Just label him. He’s “incoherent.” He’s “hilarious.” He’s “an Obot.” He’s “argumentative.”

Pretty much any derisive or dismissive label will do, if all you want — or all you can hope — to accomplish is to mislead the gullible.

To his credit, Apuzzo does actually try to bring some support to his “hilarious” statement. But the argument is an absolute “straw man.”

Here’s how you do a “straw man” ploy. First, you claim (as Apuzzo did here) that your opponent is making some ridiculous argument (one that he isn’t making) instead of the argument that he is making.

Then, publicly knock down the “straw man” you have set up. Hey, you’re a winner!!!

You’ve shown how big you are by kicking the stuffings out of the straw man— after first convincing the gullible that the straw man is the real argument.

And by doing so, you avoid publicly facing the real argument that — if you actually do face it — is going to embarrassingly knock you on your butt.

Here’s the actual statement I made. It’s a perfectly true, valid and logical statement:

The statement: “There is no doubt that someone who has A PLUS B can be a member of this club.”

IS NOT a statement that

“Nobody who only has A can be a member of this club.”

Mario sets up his straw man to pretend that he has shown that statement to be false. He has not.

All he has done is demonstrate that he claims a clearly true and logical statement to be false, and that when presented with a true and valid analysis, his response — rather than acknowledging its validity — is to try attacking it using a straw-man argument.

Now we weren’t actually talking about cows. But since Mario has a fascination with livestock that moos, let’s reconstitute the argument in terms he can relate to:

“Any large animal that gives milk and has horns is definitely a cow.”

“No large animal that gives milk, but is hornless, can possibly be a cow.”

And in fact, a bit of research shows that there are indeed breeds of cattle that give milk, but who have no horns. They’re called “polled” dairy cattle, and they definitely exist.

And yet they do. Good heavens. Mario forgot to tell the cows.

Before moving on, I’d like to make just one final note as to how ridiculous the claim is.

When the Supreme Court addresses a matter, they address it. They don’t write just one or two sentences on a matter. They go extensively into the pros and cons.

The Court spent 6 entire pages on whether or not Virginia Minor was a citizen — when it had already been conceded by everybody that she was!

And the Court told us themselves, in Minor v Happersett, that they weren’t going to get into citizenship issues regarding the children born on US soil of non-citizen parents.

How much space would it take for the Supreme Court to actually explore the issue? Would one or two sentences do?

It turns out that we know the answer to that question: It would take the Supreme Court more than 50 pages to explore that particular issue. Not two sentences.

And we know that, for a fact, because that’s exactly how much space it did take them, when they finally explored — and answered — that EXACT question.

So What Do Recognized Authorities Think of the Claim?

We have beaten the ever-living daylights out of the false claim that Minor v Happersett established a “binding precedent” that it takes two citizen parents plus birth on US soil to make a natural born citizen. We’ve ripped it down from 4 different directions.

In the 5th and final part of this series, we will see what our courts think of the claim.

7 Responses to The Supreme Court in Minor v Happersett Never Claimed That Citizen Parents Are Required to Make a “Natural Born Citizen.”