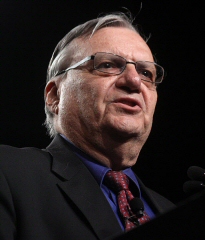 Virtually Every Claim Made by Sheriff Joe Arpaio's "Cold Case Posse" Had Been Publicly and Factually Debunked Before Their Investigation Was Ever Launched (Photo: Gage Skidmore)

Yesterday, Sheriff Joe Arpaio (“America’s Toughest Sheriff”) held a press conference in which he announced to the world his “preliminary conclusion” that President Barack Obama’s birth certificate is a “forgery.”

Working under the assumption that Arpaio had competent investigators at his disposal, that conclusion — based on the evidence that they presented –was frankly the last thing I expected to hear from Arpaio’s office. That they made the statement they did is nothing short of astonishing.

Every single significant point in Joe Arpaio’s posse’s official report on the birth certificate was both thoroughly examined and factually debunked in the book that I wrote and published 6 months ago — before Sheriff Arpaio’s investigation even began.

It is interesting that Sheriff Arpaio’s official report was prepared by birther activist Mara Zebest*; and appearing with the Sheriff in the press conference and actually taking part, to some degree, in the investigation, was WorldNetDaily reporter Jerome Corsi. I personally took part in a debate regarding the evidence with Corsi and Zebest, just over one month ago. That debate was rather a sham, with Zebest offering ridicule in the place of reasoned argument, and Corsi claiming he would answer my charge of his having previously presented indisputably false information to the public — and then failing to do so.

Jerome Corsi and Mara Zebest are perhaps the two most prominent activists in spreading the claims that Mr. Obama’s birth certificate is a fake.

Let me repeat that, for anyone who might have missed it: Of the issue’s two most prominent activists in promoting claims of forgery — one of them was literally involved in the investigation — and the other prepared the posse’s official report. This in itself is astonishing, and suggests a deeply tainted investigation.

Over the course of my book, I demonstrated that not one of the claims that had been advanced, whether by Mara Zebest or others, or publicly backed by Jerome Corsi, were able to withstand scrutiny. Some were literally laughable. Others were worthy of serious consideration. But in the end, after careful analysis, none turned out to be at all convincing.

Anyone who doubts the truth of that statement should work through the book in detail, and attempt to write a convincing refutation to the evidence presented.

To give you an idea of how difficult it is to invalidate the facts presented there:

Six months after the publication of the book, neither Corsi nor any of those he has presented as experts has factually refuted even one significant point made in it. And even though they attempted to explain away the effects of optimization at Sheriff Arpaio’s press conference and in Zebest’s official report, that statement still remains true today.

In fact, the claim that they made against the optimization scenario was one that I specifically dealt with in the book.

Last fall, I twice contacted Sheriff Arpaio’s office to let him know of my 3-month, 500-hour investigation, and/or to offer my help.

His posse claims to have interviewed dozens of people and examined hundreds of documents during a 6-month investigation. But although my name was actually mentioned in his press conference — in the “concluding” video — I was not among those consulted or interviewed.

Moreover, their investigation seems to have produced very little that had not already been publicly claimed — and debunked — at the time they initiated it.

I see two possibilities as to what yesterday’s press conference was all about.

Either it was a political stunt, or it was actually intended to present the results of a real investigation.

If it was a political stunt, it may have been effective. Time will tell.

If it was intended to present the results of a real investigation, then it appears to have been tragically incompetent — both from a technical point of view, and from an investigative one.

From the technical point of view, the claims that have been presented make no sense at all; and those making them have half-ignored, and half glossed-over, the one technical explanation that does make sense.

From the investigative point of view, as far as I can tell, Sheriff Arpaio’s office has completely failed to meaningfully interview people on both sides of the issue. The Sheriff’s posse had before them an accusation that the President of the United States is a fraud — that he has a forged birth certificate. They quite obviously paid a good deal of attention to those making the claim that the birth certificate is forged.

But they appear to have failed to even TALK to those who were able to explain why those charges don’t make sense — even in an instance in which one of those people contacted their office twice, to offer his assistance.

Following the press conference and my examination of their report, my wife asked me whether I was still confident in the information I have presented to the public. My answer to that question is: “Absolutely.”

For those who would like further technical information on why, despite the “conclusions” of a posse in Arizona, there is still no credible evidence of forgery, I recommend reading and fully understanding the book. For some specifics regarding the posse’s results, I can also recommend the hour-long interview that I conducted last night with Reality Check Radio. That interview is available at this link, beginning at exactly 60 minutes into the show.

*Ms. Zebest’s anti-Obama activism goes way back to the summer of 2008. According to publicly-available information, she was one of the original “PUMA” (“Party Unity My A**”) activists who were supporting Hillary Clinton for the Presidential nomination and who would not “step aside” for Barack Obama.

On July 25, 2008, a poster clearly identifiable as Ms. Zebest — not only from her nickname of “mzebest,” but also from her clear description of who she was and her professional qualifications — wrote, at pumapac.org, “LOL! It’s what I live for – my goal to make [Barack Obama] a mockery of the very crowd he seeks for adulation.“

I have nothing at all against anti-Obama activism — as long as it’s based on reality.