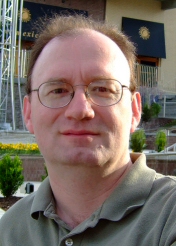 John Woodman has spent 20 years as a computer guy in varying capacities — including programming, consulting, designing and building software (both for the US government and for private industry), networking, etc.

Since 2003, he has been an independent, self-employed computer professional. His academic background is in mathematics, computer science, and physics.

John lives with his family in Springfield, Missouri. He and his wife have six children.

For one reviewer’s take on John’s contribution to the public questions regarding President Obama’s eligibility to the office of President, see here.